Information about the new version of Ramstetter.com, which went live in April 2020.

The old version of Ramstetter.com was created with GatsbyJS version 0, which dates to 2016. That software is no longer maintained, and it was becoming increasingly difficult to make updates.

This new version is also using GatsbyJS, but version 2.11. The site is using Bootstrap among others for CSS. I’m hosting it on Netlify. DNS is (as previously) on Cloudflare. The sources are hosted in Github. I’ve got a CircleCI job running. Can you believe all of this tooling is free (like beer, not freedom)?

When I created the prior version of this site in 2016 (GatsbyJS v0), JAMstack was in its infancy. Only two years prior in 2014 I was blogging about my travels on the AT and PCT in a slow-to-load WordPress install. In the ~4 years since, it’s become clear that JAMstack is here to stay. The static webpages of the late 90s are back (in this case, horrible gifs included).

I’m not a frontend developer by any means, and yet I find web technologies fascinating if only because they’re new to me. I’ve made a number of customizations to this new version of ramstetter.com, which have required that I dabble in CSS & SASS, GraphQL, and React JSX. There’s aren’t technologies I’d otherwise encounter.

In the few hours that I explored Gatsby’s starters, I found that a common design practice is to artificially limit the screen width (see Bootstrap’s “container” class). I can’t discount that my sample set may have been invalid. Regardless, I understand the temptation to do this: it makes responsive design easier. But I refuse. I paid for the @#$% 4k monitor, and I’m going to use it.

Here’s a screenshot of me editing this page in Visual Studio Code (vscode): 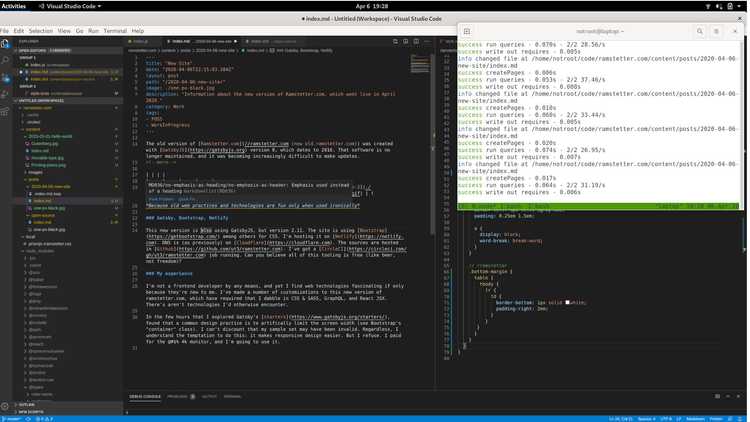